Topshop is a chain of clothing stores Topshop/ Topman – Retail outlets with a similar corporate outlook –  wanted large screen displays with their projectors hidden from the public view. The projectors should be discreet and no shadow images be cast should there be fashion shows held along the catwalk.

Overall, the outlet wanted a good sound system to be integrated with the plasma that would be displaying their fashion collection as well as their corporate music video, enabling the multimedia display to attract customers from a distance, as well as to project their brand image 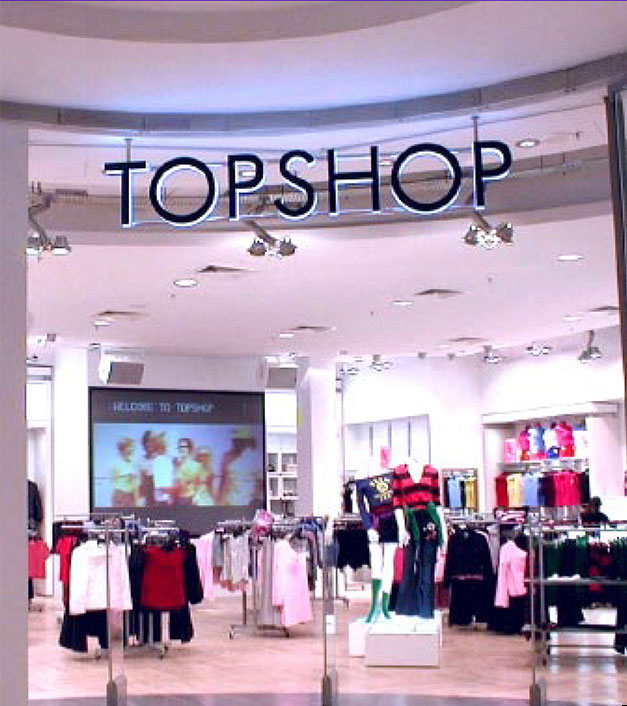 Topshop is a chain of clothing stores established in 1964 within Sheffield Department Store, Peter Robinson. In 1974, Topshop was taken out of Peter Robinson and set up as a standalone retailer. Since then, Topshop has grown to 309 fashion stores throughout the United Kingdom and Republic of Ireland, including the world’s largest fashion store at Oxford Circus.Its primary sales come a range of products including clothing and fashion accessories.

Although in the 1980s Topshop was considered to be deeply unfashionable, the chain has reinvented itself as a fashionable brand. Several branches of Topshop can be found outside the United Kingdom, most notably in the Republic of Ireland, Gibraltar, Japan, Malaysia, Indonesia, Singapore and the Philippines.

Space is limited but a large screen display is required to enhance the outlet with a few other display devices, strategically located throughout the store.

In order to utilize a limited back room space for rear projection, an angled mirror is required to reflect the image to the screen, thus enabling sufficient throw distance for the visual to be projected onto a large screen.

The projector can either be mounted onto the ceiling, or be stood on the floor at an angle to direct the image onto the mirror and subsequently to the screen. Under normal circumstances, the distance between the projector and screen is normally doubled, or more, to project such a huge image.

The retail outlet is also filled with plasma displays, which were installed in the center and side wall of the outlet to provide in-house music videos.  The audio quality is enhanced by the speakers which are located around the store.

The setting of all the equipment is carefully designed to integrate into the retail outlet, and not a single AV equipment should appear to be an obstruction to their consumers. The source equipments are hidden away from the public eye and can only be manipulated by the authorized user. 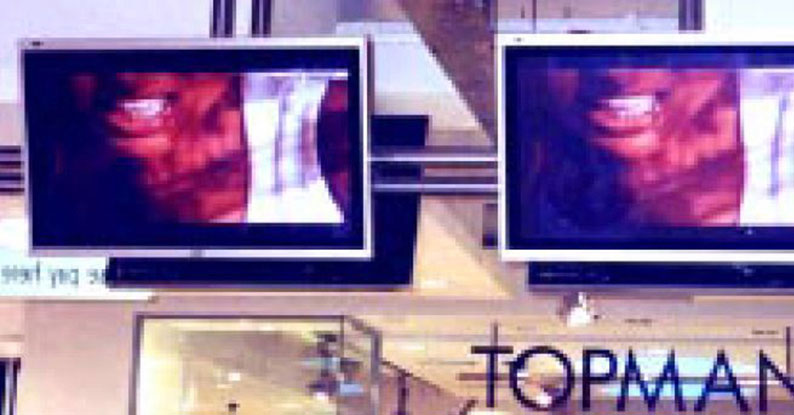